In the 1960s, an American artist collective was founded under the name E.A.T – Experiments in Art and Technology. The collective, under the direction of Billy Klüver and Robert Rauschenberg, aimed at close collaboration among engineers and artists, as recorded in its charter of 1967. A forward-looking initiative that made technology and social responsibility the substantive core of its activities. The collaboration was designed to engender mutual inspiration and to enable artists to use new technologies effectively for their projects.

“Engineers are becoming aware of their crucial role in changing the human environment. Engineers who have become involved with artist’s projects have perceived how the artist’s insight can influence directions and give human scale to his work. The artist in turn desires to create within the technological world in order to satisfy the traditional involvement of the artist with the relevant forces shaping society. The collaboration of artist and engineer emerges as a revolutionary contemporary sociological process.” [1]

Nowadays it is no longer unusual for artists to collaborate with technology companies. Here they will find a “playing field” of interesting opportunities and experts who provide support for tricky questions of technical implementation. Conversely, technology companies also recognize the many faceted opportunities and potentials of cooperating with artists. For instance, mutual inspiration enabled Google to develop its virtual reality project “Tilt Brush” further and to obtain exciting contents for its communication. For artists who in the past have preferred to work in a classical medium, this cooperation resulted in previously unimagined opportunities for entirely new modes of expression in virtual space. An ideal interplay.

For its customers, INNOQ designs both the digital present and new business models for the future. INNOQ is aware of the social responsibility it bears in this area. This consciousness is an integral component of the corporate culture, and thus its collective thinking and action. This is also where media art comes into play. Because it offers a place for reflection regarding questions that concern us all: How does technology influence our behavior and our perceptions of the world? How does technology influence the development of our society or our environment? How can we live with the consequences, or how should we react?

Media art can open up entirely new perspectives. In the context of the Corporate Design Relaunch and working together with the agency ‘die firma,’ a program was developed for collaboration with media artists. INNOQ Digital Art offers an extraordinary opportunity to support one selected project each year. The focus is on joint development of the artworks and an intensive interchange among employees and artists. The goal is shared learning and mutual inspiration. The results of the collaboration with media artists are presented in changing editions in the context of the digital and analog image of INNOQ.

Artists and Developers – Code as a Common Language

When dealing with media art, there is no getting around one institution that is unique worldwide: The Center for Art and Media (ZKM) in Karlsruhe. As chance would have it, the ZKM was preparing a big new exhibition at the start of 2017, designed to inform citizens about the topic of codes not only through the exhibition of artistic and scientific works, but also to convey tangible experiences through a wide variety of interactions. After just a few discussions, it was clear: this was a pathway toward fruitful collaboration. In a joint pre-selection of artists with the ZKM team, the decision was made to collaborate first with the British-Columbian artist Matthew Plummer-Fernandez.

And that also is where the challenges began: just three more months until the start of the exhibition, the coordination of all participants between England and Germany, and many unsolved artistic and technical questions: How are 3D files transferred automatically to a simple website? How well does facial recognition work under exhibition conditions? How fast can the distorted facial objects be integrated into the infinite stream? Which server and processor capacities are needed for the live presentation of the work on a monitor tower five meters tall? And how long can the “infinite” work actually be kept alive?

During the months prior to the start of the exhibition, a number of difficult questions had to be resolved – with the support of the INNOQ expert, Simon Kölsch. The fact that the artist lived in England and the developer in Germany was not a problem. After an initial meeting at the INNOQ site in Offenbach, Germany, collaboration was started via GitHub. That made it possible to develop the code jointly.

“Vertigo in the Face of the Infinite” is a work of art that initially exists online as a website, but also takes on physical form, the form of a digital sculpture nearly five meters tall. Extending across five monitors, a scrollable infinite stream of three-dimensional objects appears. Plummer-Fernandez mined these curiosities from public online archives of ambitious 3D modeling fans. His artistic code continuously stacks them atop one another in a random order. A continuously changing feed, with which we are all familiar from our personal Facebook or Twitter feeds – bringing to light once more the past, the lost, and the rejected. The in part irritating 3D fragments reflect the flood of information of our current Internet culture, consisting of social media feeds, microblogging, and journalistic activities around the clock. The media flow hungers for our attention and virtually forces us to participate, if we do not want to drop by the digital wayside.

“Vertigo in the Face of the Infinite“ also allows us to participate. We stand in front of a touchscreen with integrated camera, take a selfie, and moments later become part of the feed. Our image, however, is merely a grotesque distortion, similar to the revealing distorting mirrors at the county fairs of an earlier age.

Who are we in the face of the digital? In response to this question, there remains only the certainty that we are part of a mass of data that we do not really understand and can also no longer control. Even if we materialize again, like some of the distorted faces from the virtual tower images, which find their way back to reality as 3D printouts, we still find ourselves increasingly hemmed in by a uniform structure from which there seems to be no escape. Topics like the digitalization of all areas of life, the transparent customer, the automatic storage and processing of mass data, and political influence through fake news suddenly attain a new importance.

“Digital Art can do a lot for audiences. Some practices are very didactic, making people more aware of the systems that they use or the hidden infrastructure. Digital art could also be used to test boundaries and discuss social norms.“

Fascination for Code – the Soft Power of Automation

Plummer-Fernandez deals with the way that algorithms now control our lives at many junctures – whether booking travel or doing research for a book. Algorithms are now not only providing support; they are also making decisions for us.

Plummer-Fernandez refers to this entity as “the soft power of automation.” And it fascinates him. He tracks it down on the net and archives his finds on his tumblr blog Algopop. His art often has a playful tone. Yet it is precisely his supposed playful ease that stimulates us to think about interrelationships and concealed structures of power.

And so we have come full circle. INNOQ also understands technology as an opportunity and sees many opportunities for positive digitalization. Not only as a business model, but also as a way to participate actively in shaping our future. For one thing, we need to question technological developments critically and view them from different perspectives; for another, we need to be curious and experiment courageously with new technologies. Ideally, digital art can be fertile ground for both aspects. For this reason, the edition “INNOQ Digital Art” was created, which each year will provide new and surprising, visual and substantive accents and will hopefully contribute to a new way of looking at codes and algorithms. 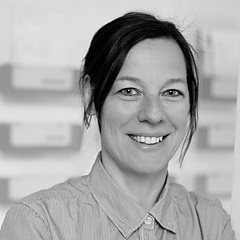 Simone Ried is a Senior Content Curator working for the agency die firma in Wiesbaden, Germany. After a degree in architecture, Simone received a scholarship for the program “Visual Arts Administration: Commissioning and Curating Contemporary Art” at the Royal College of Art in London. At die firma, she works with clients to develop new topics and is specialized in the creation of exceptional events.